I would like to introduce you to a community of displaced persons that I have had the opportunity to work with during my time here in Kathmandu.  This is the community that I have written about to you before as my work with them reaches back into the beginning of my time here in Nepal.  A community with Tibetan origins that have made their homes in the villages that make up the Langtang Valley. Geographically, the Himalayan Region of Nepal—the region in which the Langtang Valley lies—is situated just under the border that the country shares with China.  The ancestors of today’s Langtangpas are believed to have origins from Tibet that reach back more than 600 years.  This area is sometimes referred to as “Beyul”, meaning “hidden valley”, as it was untouched by outsiders for hundreds of years.  Due to this, their Tibetan roots can still be seen in the Langtangpa culture through their food, dress, and local language—a dialect of Tibetan spoken almost exclusively by the Langtang people. This region originally sustained itself through agriculture; however, in relatively recent years, it has become a popular trekking destination complete with tea houses, lodges, hotels, a cheese factory, and even a bakery. 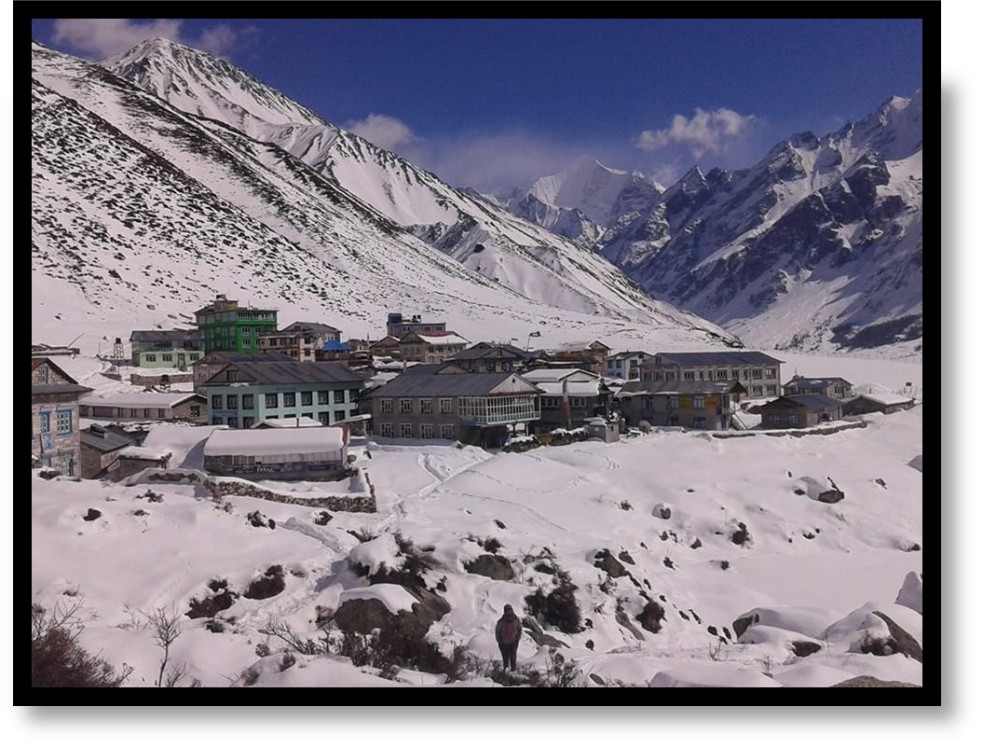 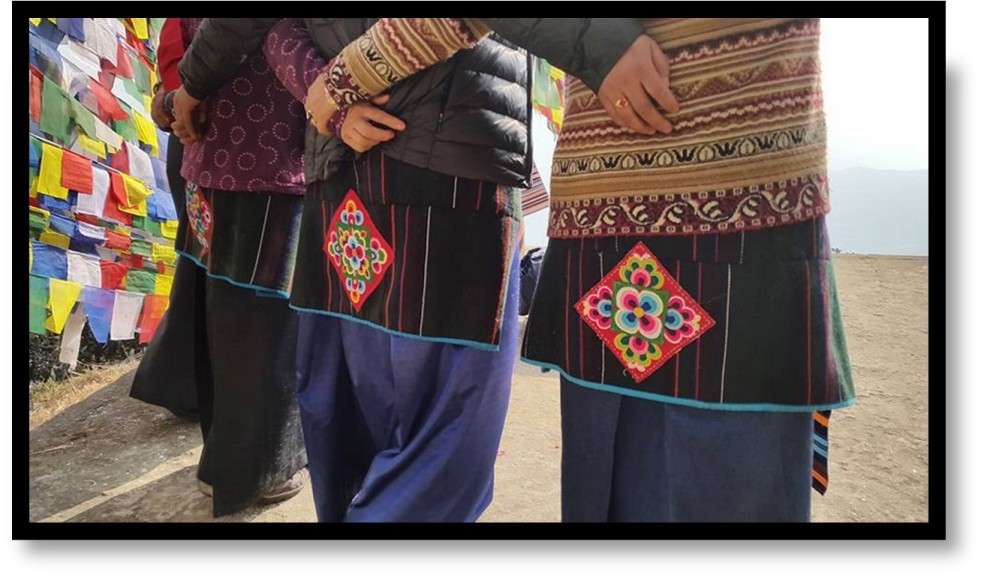 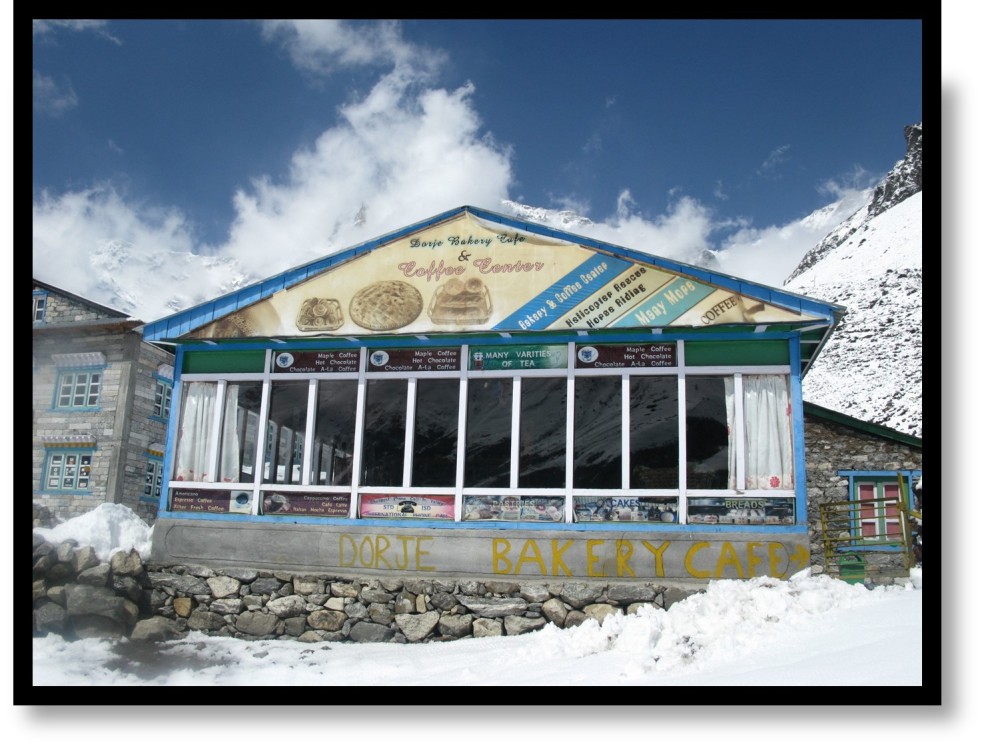 Photograph of Dorjee Bakery that was located in Kyanjin Gumba before the earthquake.  Photo taken by the owner of the bakery, Lhakpa Tamang Jangba.

Just under a year ago–on April 25, 2015–the Langtang Valley was devastated by the 7.8 magnitude earthquake that struck Nepal.  In this specific area, the earthquake caused an avalanche that comprised half the force of the atomic bomb that as dropped on Hiroshima according to a study published in the journal Science.  Ellen Barry writes in an article for the New York Times, “The impact was equivalent to the detonation of 7.6 kilotons of TNT, the study estimated; the bomb dropped on Hiroshima in 1945 was equivalent to about 16 kilotons.”  You can read the rest of Barry’s article about the avalanche in Langtang here.  The analogy presented allows outsiders to gain some insight into the devastation; however, the impact can only fully be understood by those personally affected. 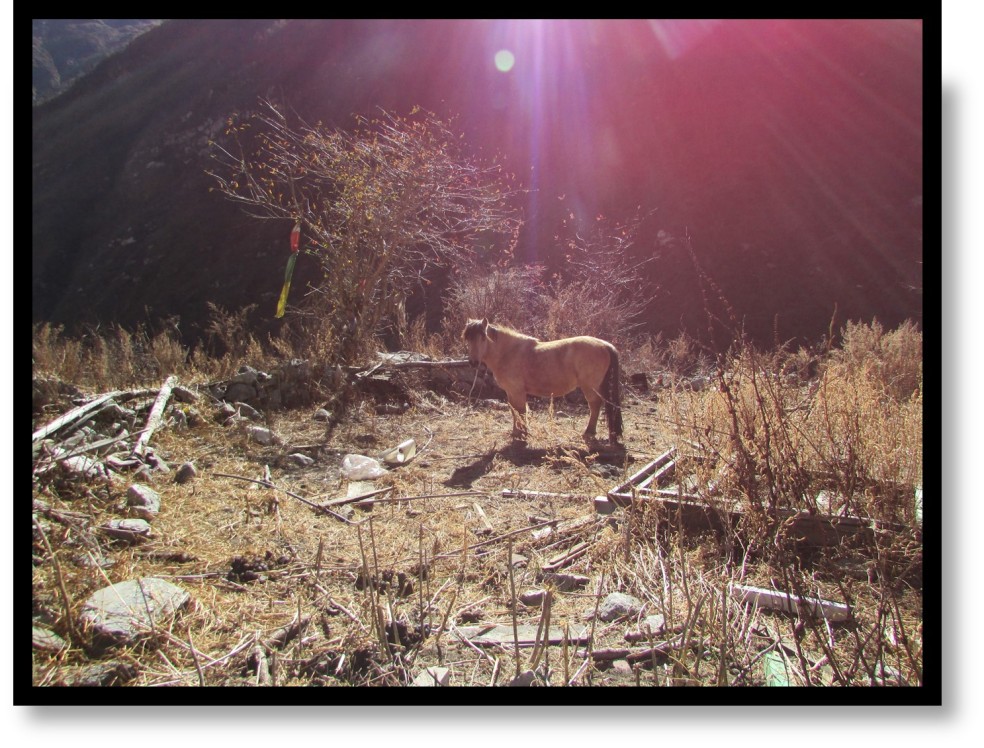 175 Langtangpa lives were lost that day.  About 350 individuals in total—including tourists and foreigners in Langtang Valley during that time—were killed. It is a story of loss and destruction; a story transitioning into remembering and rebuilding.  . The surviving members of the Langtang community have bound together in mourning their losses, remembering the past, and looking towards the future collectively—a future that holds the “New Langtang”. Physical rebuilding efforts have been led by the Langtang Reconstruction Committee–a committee that was formed in the aftermath of the earthquake that is led by community leaders working in conjunction with local and foreign assistance.  The committee has been able to accomplish a lot by way of distributing financial assistance to those in need, gathering and transporting materials needed for the rebuilding process, as well as organizing training programs such as baking classes, jewelry-making and knitting projects, and language lessons for the Langtangpas to partake in.

Photograph of the rebuilding process taken by Dawa Lama 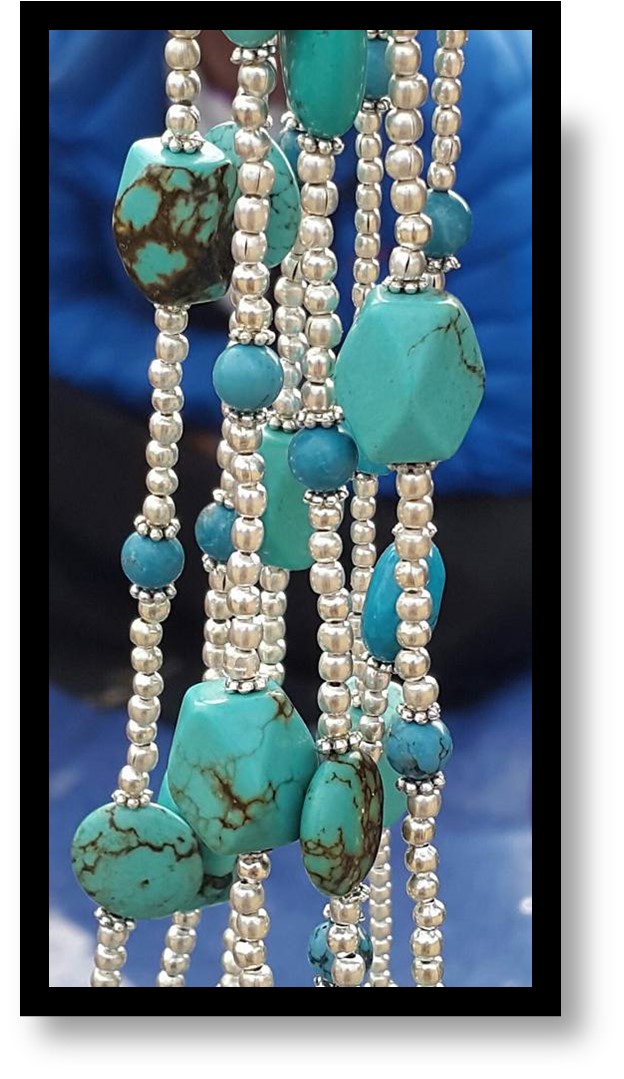 Photograph of jewelry made my Langtangpa participants in jewelry-making training.  Photo taken by Lhakpa Tamang Jangba.

The physical damage of the villages endured by this community is not the only area in need of repair.  The most valuable loss is the loss of life, the subseuqent loss of cultural knowledge, and the incompleteness felt within the Langtangpas.  As one leader of the Langatangpa community, Lhakpa Tamang Jangba, has said many times,

Langtang Valley is not just a location; it is our identity.

An identity that has become threatened by loss.  Identities are made up of personal and collective elements–culture, location, the people around you.  Perceiving one’s identity as being threatened is to find oneself in the depths of the unknown, detached from familiarity, questioning who you are and how to hold on to what once was. It is a position characterized by suffering.

In order to preserve some pieces of the Langtang identity, there has been a demand for the preservation of the Langtang culture, a dedication to remembering what is distinctly Langtangpa, and creating a platform for the Langtangpas’ voices and stories to be heard. The work that I have been participating in with this community seeks to create this platform. I wrote to you before about the work that I have been doing with the U.S.-based organization, Picture Me Here. Since that time, this work has been evolving, combining forces with a larger project connected to the community—The Langtang Memory Project. This project is comprised of a group of individuals and organizations working to create a web-based and physical archive dedicated to the Langtang Valley, the stories and the people–passed and remaining.

Currently, I am organizing a photography exhibit with the help of another American woman, Robyn Scarth, to display the work of the Langtangpa participants in the photography empowerment training led by Picture Me Here.  The photos that you see in this post are photos taken by the Langtangpas and are an example of the work that will be shown in the exhibit.   It will be located in Boudhnath, Kathmandu, home to the Boudha Stupa—a World Heritage Site and sacred location for followers of Buddhism. Although the Stupa was also damaged by the April 2015 earthquake, it remains a popular destination for foreign visitors as well as Nepalese citizens. This location will serve as a means for many individuals to be introduced to the story of Langtang. It is not just the story of the earthquake that we seek to tell; it is the complete Langtangpa story told by the Langtangpas themselves.

The concept of telling one’s story is a concept that has become very important to me in recent years. The courage that accompanies the telling of one’s story is not validated without another person to listen to that story. I first experienced this in my personal life through my own struggle with my head injury—a time in which I also felt a threat to my identity, a sense of self loss. When I finally learned to tell my story, there were many people who did not listen, leaving me again with a sense of incompleteness. It was when the other person listened, that I felt my story was validated. After experiencing this firsthand in my personal life, I encountered this concept in my return to academics.

Within the academic realm of postcolonial studies, there is an article written by Gayatri Chakravorty Spivak entitled “Can the Subaltern Speak?” The term subaltern refers to the person who is marginalized, oppressed, the individual with less social agency. As a response to the question posed in this article J. Maggio wrote an article entitled “Can the Subaltern Be Heard?”—an article that put words to what I experienced in my struggle to be heard. Maggio writes:

The ‘cannot speak’ in ‘the subaltern cannot speak’ is gesturing to the impossibility of speech to an audience that refuses to hear and respond to the crying out. It is in this incomplete transaction that suppresses the subaltern . . . [S]peaking, as a complete transaction, is only possible on the contingency of the reception of the sent message (430).

It is my intention to facilitate this complete transaction of speaking and listening.  As I collect the photos for this project, some common themes have emerged amongst the different photographers. Organizationally, I have identified these themes as the following: Langtang Culture and Tradition, The Faces and People of Langtang, Langtang in the Past, Langtang Now, Langtang Rising, Life in Kathmandu, and “Home”. After meeting with some of the participants, we have decided to name the exhibit “LANGTANG RISING”—a self-empowering phrase that has been used often by the Langtangpas themselves during this rebuilding phase. 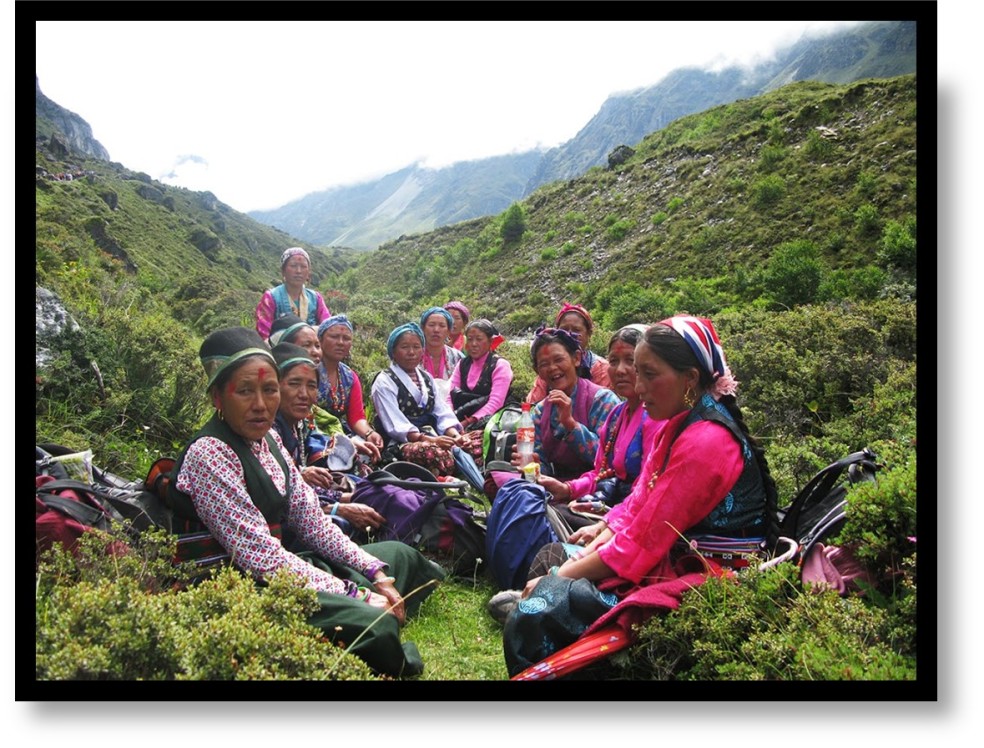 The photographs that the Langtangpas have been taking are incredible–capturing the beauty of the people and the culture, capturing the stories of devastation and heartbreak.  These individuals are telling their stories through their photographs.  It is a time for those outside of the Langtangpa community to listen, to learn, and to validate their experiences.  I am so grateful to have met this community, to have been given the privilege to hear their stories and to create platform for others to hear it as well.

Thank you for listening to what I have gathered from the Langtangpa story thus far.  I look forward to sharing more with all of you as I continue to learn here in Nepal.

Maggio, J. “Can The Subaltern Be Heard? A (re)Examination of Spivak.” 2007.http://citation.allacademic.com/meta/p143726_index.html